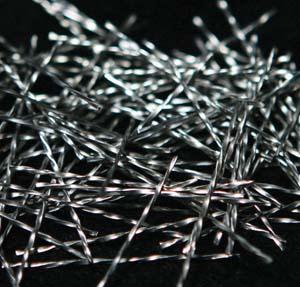 Helix works with the concrete to improve its performance. Helix increases the bending strength and raises the ﬁrst crack strength. It also improves ductility, or ﬂexibility, and adds considerable resistance to cracking. Helix is speciﬁcally designed to not affect the compressive strength of concrete.

Helix was originally designed to replace rebar for earthquake and blast resistance and has been used commercially for these and other structural applications.

During the ﬁnishing process, Helix settles below the surface leaving no visible pieces.

Helix is electrogalvanized with zinc to prevent rust and other corrosion. Unlike standard rebar which may not be treated at all or simply have a fragile epoxy coating, Helix has an infused layer of zinc that won’t chip, ﬂake or crack.